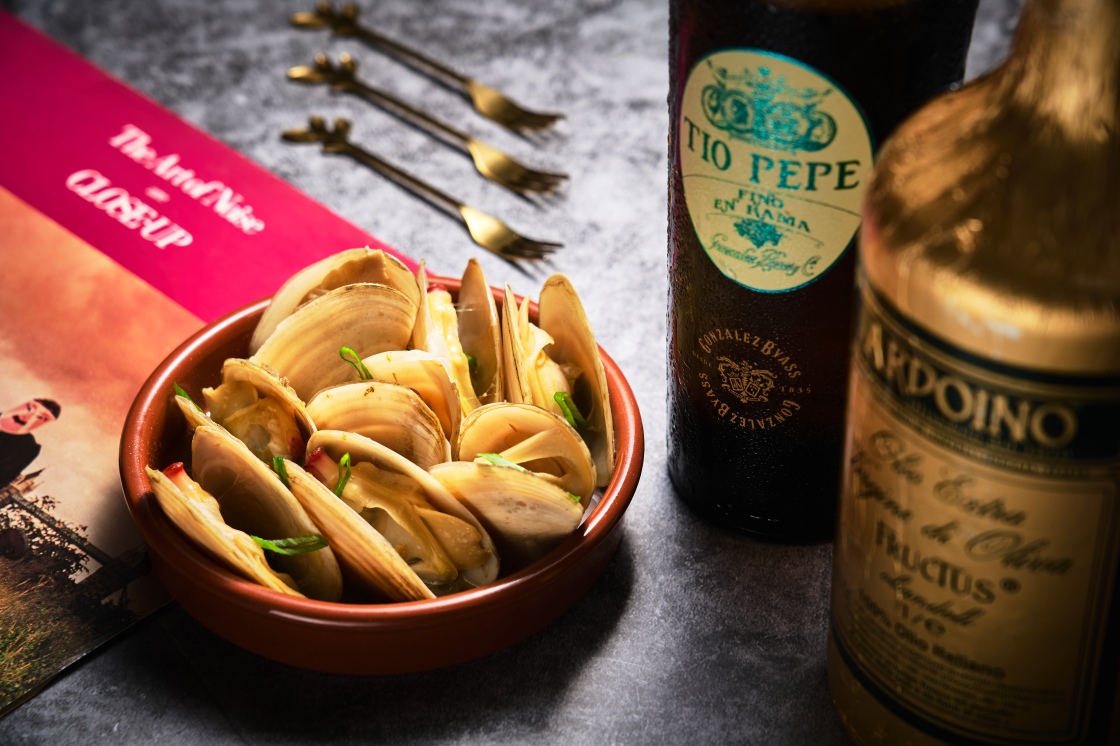 With a name that reads like the ultimate night out, Beats Bites & Cocktails (BBC) had us expecting a ball of boisterous fun when we entered its nondescript shophouse entrance along Bukit Pasoh road. Turns out, the party had yet to start at 6:30 pm—we were the only ones cosying up in its lounge, which had dark brown banquette seats across an acid-washed concrete bar that flowed seamlessly into a DJ station. Thoughtful details were aplenty, from the Devialet Phantom speakers flanking a sound suppression wall decked in soft flannel and corduroy to the colourful vinyl records backdropping the DJ booth.

While live music isn’t currently allowed, we could absolutely see how the bar’s concept of music, food, and cocktails in equal measures, would soar once the COVID-19 restrictions were lifted. The brainchild of Caroline Tan and Douglas Williams, a duo of F&B consultants who previously helmed Bottle Boot & Cigar in Beijing, the restaurant is also home to an outdoor mini garden with peppers, butterfly pea flowers, and other botanicals harvested for use in the kitchen and bar.

Helmed by Dee Atan, who has an extensive bartending history in Singapore including IBHQ, the bar offers a drinks programme that is extensive and well-curated. Riding on the wave of the alcohol-free spirits trend, BBC offers the usual suspects, such as Melati Drinks, Lyre’s, and Kolonne Null. We were welcomed with a glass of Kolonne Null Rosé wine, which teased our taste buds with its fruity notes, followed by the refreshing Copenhagen Sparkling Tea Vintner. On the dining front, guests can expect small bites cooked with binchō-tan wood in the Bertha oven, said to be the first of its kind in the Lion City.

When in doubt, go for the Bites Tasting Menu, priced at a value-for-money $148++ per pax for 13 snacks, five drinks, and one drink-dessert hybrid. Our verdict? While the parings had hits and misses, we loved the well-paced service and flavour-packed combinations. The first pairing came with a glass of Alessandro de Viona “Sinfonia de Bianco”, featuring grillo white wine macerated with the skins for six days and aged in chestnut barrels. The Sicilian white wine’s lightness complemented the appetisers, a roasted trio of kuari gochu peppers, anchovy-stuffed capsicum, as well as cold konjac noodles in dashi. Meanwhile, the morsels of drunken herbal shaoxing chicken paled in comparison—we definitely had better ones elsewhere. A favourite for both my dining companion and I was the Bertha ash biscuit with its yummy, scone-like texture. Between the two condiments offered, the grilled banana and dark rum one countered the biscuit’s saltiness better.

Onward to the second pairing, we had the White Negroni V1.0, a spirit-forward concoction made with cask-aged aquavit. It went nicely with the Cloudy Bay tua tua clam soup, whose broth brings to mind a comforting hot soup on a winter’s day. Next, the Brookynite made with High West Rendezvous rye stole the show with its bold and complex flavours, only to be slightly overshadowed by the accompanying cubes of juicy wagyu beef cubes. Now, if only we had more of the latter. Another savoury treat we enjoyed was the chicken curry tartlets, which were served with a dollop of cucumber yoghurt. The flavours were a winner, save for the tart shells that kept falling apart. Meanwhile, lovers of fatty meats are bound to rave about the succulent Tontoro pork cheeks.

A riff on a familiar hawker dish, the claypot rice served in a mini claypot with shitake, sweet X.O sausage, duck liver shaoxing sausage, was surprisingly tasty and full of desirable charred bits, despite the lack of soy sauce. For sweet endings, we were ushered over to see the “ice kachang” dessert prepared on a traditional Japanese Fujimarca ice shaver. While it made for great pictures, the dessert-drink tasted like a confusing mash-up of pineapple spiced syrup, rum, and cranberry tea—nothing we knew and loved about the popular dessert.

In a nutshell, BBC made for a memorable night out with great drinks to boot. And if a sexy and intimate vibe’s up your alley, consider this lounge and restaurant for your next date.